Ellen and I are on her bed. She says, “Mom and I were fighting in Macy’s, and I got on the escalator up. I thought she was behind me, but she was still at the bottom, and we were shouting to each other, as she got smaller. She said, ‘I want to sit on a park bench talking to Sartre’. I said, ‘You cannot make a decision. “Should I buy a sock? Should I sell a stock?” Why would Sartre want to talk to you?” She said, “That is a good question.” I say, “When I’m walking, I often think of calling Mom. It’s like a phantom limb.” I walk by the Time Warner Center every morning, near where she lived. If I called her, she would say, “Do you think I’m smart?” I would say, “Yes.” She would say, “You don’t really think that.” I would say, “Yes, I do.” Ellen says, “Keep me in your pocket when you walk.” I say, “Okay.” She says, “When I was transferring from Boston University to NYU, Dad gave Mom a check. I got on the elevator, and the door closed before she could get in. I went to the fourth floor and waited. People streamed in and out. When she found me and looked at the check, she saw Dad had forgotten to sign it. She said, ‘Oh my god, what should we do’? I said, ‘Sign his name, Ma’. She said, ‘You can do that’? I said, ‘Sign his name’. A week later the bank called Daddy to let him know someone had forged his name. He said it was okay. It was his wife.” She says, “After Daddy died, I would drive to the city to see her once a month. She would cook my favorite foods to take home, flanken and lima beans.” I say, “That’s what Grandma would cook for Mom.” She says, “I would balance her checkbook. She would say, ‘I’m going to run out of money’. I would say, ‘If you live to be 400, you’ll run out of money’. She would say, ‘Are you sure’? I would show her the deposits the same way each time. We’d walk to the Lower East Side and go to the Second Avenue Deli. We’d share a bowl of matzoh ball soup and a tongue sandwich on club with fries. The fries had to be extra crispy. She would say, ‘Oy, this food is grabbing me’. I would say, ‘East slower and talk less’. She complained when the tongue sandwich went from $12 to $18, but she always paid.” She sits up a little taller and says, “She made me get out of the house and go to work. She said, ‘Ellen, take any job, work any hours, but get out of the house’. It changed my life completely.” She leans back. I massage her feet. Chemo has caused neuropathy. She says, “Mom would come out to help me when the kids were small. I once had three children with chicken pox. I called her, and she said, ‘I’ll be right there’.” She sips selzer. It helps with her cough. She says, “Mom had the weirdest color sense, greens and browns.” I say, “She always looked great.” Ellen says, “Yes, with her blond hair and coloring, everything looked good on her. If I wore green, I would turn green.”

Below Mom and Dad young. 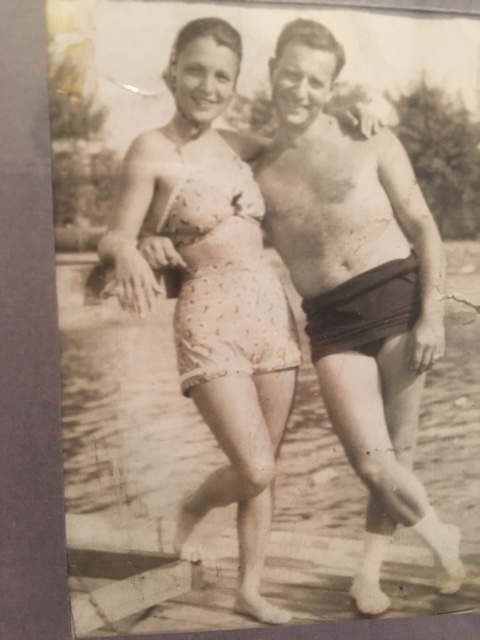